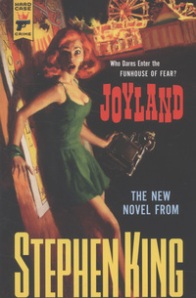 Available now in most libraries in Leeds, Stephen King’s new novel Joyland  is set in a small-town North Carolina amusement park in 1973.  ‘Joyland’ tells the story of the summer in which college student Devin Jones comes to work as a carny and confronts the legacy of a vicious murder, the fate of a dying child, and the ways both will change his life forever

The novel is about a quarter size of a typical S King and has retro-pulp cover, saying “Who dares enter the funhouse of fear?” Published by Hard Case Crime, they aim to reprint classic hardboiled fiction by writers such as Lawrence Block, Donald E Westlake.

Longer review in the Guardian

One thought on “Joyland by Stephen King”