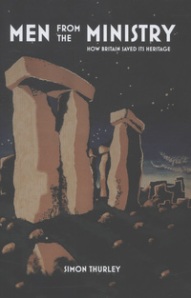 Not read this yet, but it sounds really interesting. Between 1900 and 1950, the British state amasssed a huge collection of over 800 historic buildings, monuments and historic sites and opened them to the public. Nothing like it had ever been seen before. Men from the Ministry explains why the extraordinary collecting frenzy took place

‘It was an enterprise without precedent and – from the prehistoric monuments of the Orkneys to the great medieval coastal forts of the English Channel – it was the foundation of today’s National Heritage Collection’. To quote English Heritage:

‘Of course, rulers and governments had long assembled national collections of paintings, sculptures and books but this endeavour saw the British creating an outdoor museum of national history for the first time.

In Men from the Ministry: How Britain Saved its Heritage, English Heritage’s Simon Thurley explains why and how this extraordinary collecting frenzy took place – and introduces the politicians and civil servants who devised this great scheme. He also traces the gradual rise of wider heritage protection, the listing of buildings and monuments by the state for their protection. For the first time, all this activity is set in its political, economic and cultural contexts. Published by Yale University Press, Men from the Ministry paints a picture of a country traumatized by two World Wars, fearful of losing what was left of its history, and a government that actively set out to protect its built heritage.