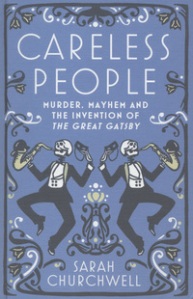 “Parties are a form of suicide,” according to F Scott Fitzgerald but that didn’t stop him attending quite a few.

Anyone who’s caught the new film version of the Great Gatsby (or seen the other version with Robert Redford or read the novel) might like this book by Sarah Churchwell – it is a biography of the actual novel ‘The Great Gatsby’.

The title Careless People alludes to Fitzgerald’s description of Tom and Daisy Buchanan, key characters in the novel. It explores in newly rich detail the relation of Fitzgerald’s classic to the chaotic world in which he lived – and it ‘elevates a sensational contemporary murder story, what Churchwell calls “a phantom double”, to the status of prime suspect.’ It also provides a fascinating insight into the lives of Scott and Zelda Fitzgerald.

Read more in this Guardian Review