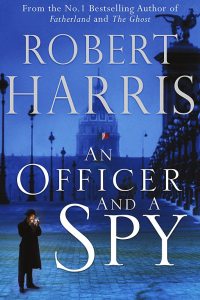 Robert Harris has written eight bestselling books including The Ghost, The Fear Index, Fatherland and Enigma. His work has been translated into thirty-seven languages and many of his books have been turned into films.

His latest novel is set in the heart of Paris at the end of the 19th Century, and is a compelling recreation of a scandal that became the most famous miscarriage of justice in history – the Dreyfus Affair.

An Officer and a Spy

January 1895. On a freezing morning in the heart of Paris, an army officer, Georges Picquart, witnesses a convicted spy, Captain Alfred Dreyfus, being publicly humiliated in front of twenty thousand spectators. The officer is rewarded with promotion: Picquart is made the French army’s youngest colonel and put in command of ‘the statistical section’ – the shadowy intelligence unit that tracked down Dreyfus.

The spy meanwhile, is given a punishment of medieval cruelty: shipped off to a lifetime of solitary confinement on Devil’s Island, Dreyfus is forbidden to speak to anyone, even his guards, and his case is closed forever. But gradually Picquart comes to believe there is something rotten at the heart of the Statistical Section.