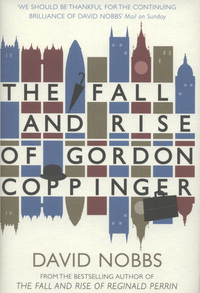 Love Arts Festival is delighted to host an evening with writer David Nobbs as part of his 2013 tour. You can enjoy an evening with David, who can take the subject of mental health and make us laugh, see how to book below.

In the 1970s David Nobbs created the ultimate comedy about a man having a nervous breakdown, ‘The Fall and Rise of Reginald Perrin’. Reggie appeared in several TV series and books and after a while audiences began to suspect that he was the only sane man in a mad world.  In ‘An Audience with David Nobbs’ the man behind Reggie Perrin looks back on 50 years as a comedy writer. His first writing job was on ‘That Was the Week That Was’ and he worked with all with comedy greats: Frankie Howerd, Ken Dodd, Dick Emery, Kenneth Williams, Jimmy Tarbuck and The Two Ronnies. With another half dozen successful TV series behind him, plus many more books and plays, David Nobbs takes to the stage for the first time himself to tell the funny stories behind a lifetime of comedy writing.

Love Arts is England’s biggest celebration of creativity and mental well-being the festival offers music, theatre, exhibitions, comedy, literature, dance, cinema and more. Each event has a connection with mental health, often created by artists with personal experience of the issues. This year’s theme is sharing stories – it helps to talk about mental health.

If you haven’t read any of his work, we have copies in stock to enjoy, including his latest book the Fall and Rise of Gordon Coppinger

Synopsis: ”When revelations about the scandalous relationships and less than honest business practices of Sir Gordon Coppinger – infamous financier and devotee of excess – are made public, the glamorous facade of his London life begins to crumble and those around him fear the worst. But, much to Sir Gordon’s surprise, all he can feel is relief’