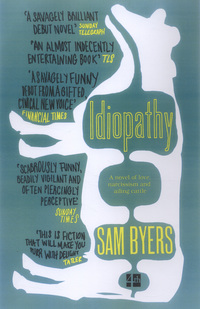 It’s lovely to have some new authors to try so here’s the Costa Awards shortlist for new novels featuring titles that are all in stock @leedslibraries. Anyone fancy posting a review?

Idiopathy by Sam Byers  Katherine has given up trying to be happy. Thirty, stuck in a job and a town she hates, her mounting cynicism and vicious wit repel the people she wants to attract, and attract the people she knows she should repel. Her ex Daniel, meanwhile, isn’t sure that he loves his new girlfriend Angelica. But somehow not telling her he loves her has become synonymous with telling her that he doesn’t love her, meaning that he has to tell her he loves her just to maintain the status quo. When their former friend Nathan returns from a stint in a psychiatric ward – to find that his mother has transformed herself into bestselling author and Twitter superstar ‘MotherCourage’ – Katherine, Daniel and Nathan decide to meet to heal old wounds and reaffirm their friendship. But will a reunion end well? Almost certainly not.

Sam Byers was born in 1979. He is a graduate of the MA in Creative Writing in the University of East Anglia. He has published fiction in Granta, Tank and Blank Pages and regularly reviews books for the TLS. Judges: “A hilarious and breathtakingly well-written satire from a major new talent.”

Meeting the English by Kate Clanchy  In 1989, the year of news, as London bakes through the hottest summer anyone can remember, one family is embroiled in its own private cataclysm. Phillip Prys has been silenced by a sudden, massive stroke. As his girlish third wife, Shirin, pads through their faded rooms, dignified in the face of bustling Myfanwy, back to manage her former husband’s care, their adolescent children, Jake and Celia, seek refuge in drugs and food. Enter Struan. Built like a heron, fresh from Scotland, he is thrust – quite literally – into the bosom of the family, as Phillip’s seventeen-year-old nurse. He’s had experience of death, but not of London. Hampstead is a foreign country, with foreign food and foreign customs. But he finds that it also has a strange kind of magic. Under the influence of each Prys in

turn, his life begins to alter in ways he could never have imagined. And so, in the meantime, do theirs . . . Kate Clanchy was born and grew up in Scotland but now lives in England. She is a popular poet: her collections, Slattern, Samark and Newborn have brought her many literary awards and an unusually wide audience. She is the author of the much acclaimed Antigona and Me, and was the 2009 winner of the BBC Short Story Award. She has also written extensively for Radio 4 and reviews and writes comment for the
Guardian. Judges: “A gorgeous slice of a 1980s summer, stuffed with unconventional characters who stay with you long after you’ve turned the last page.”

The shock of the fall by Nathan Filer  The Shock of the Fall tells the story of Matthew and Simon, two brothers who are separated yet united by a tragic accident. Exploring themes of loss, grief and mental illness, this extraordinary novel transports the reader directly into the mind of Matthew and his slow descent into madness as he confronts his role in the boyhood death of his older brother ten years ago. Nathan Filer is a registered mental health nurse. He is also a performance poet, contributing regularly to literary events across the UK, including Latitude, Port Eliot and the Cheltenham Literature Festival. His work has been broadcast on television and radio including BBC 3, BBC Radio 4 and BBC Radio 5 Live. His 2005 poetry short film Oedipus won the BBC Best New Filmmaker Award and numerous other accolades, including Berlin’s Zebra Poetry Film Award and the Audience Choice at Toronto’s World of Comedy Film Festival.  Judges: “An exhilarating journey into the human mind that will leave you uplifted and transformed.”

Marrigae Material by Sathnam Sanghera    To Arjan Banga, returning to the Black Country after the unexpected death of his father, his family’s corner shop represents everything he has tried to leave behind – a lethargic pace of life, insular rituals and ways of thinking. But when his mother insists on keeping the shop open, he finds himself being dragged back from London, forced into big decisions about his imminent marriage and uncovering the history of his broken family – the elopement and mixed-race marriage of his aunt Surinder, and the betrayals and loyalties, loves and regrets that have played out in the shop over more than fifty years. Sathnam Sanghera was born in 1976. He is an award-winning writer for The Times. His first book, The Boy with the Topknot: A Memoir of Love, Secrets and Lies in Wolverhampton, was shortlisted for the 2008 Costa Biography Award and the 2009 PEN/Ackerley Prize and named 2009 Mind Book of the Year. Marriage Material has been picked by Waterstones as one of the fiction debuts of the year.  Judges: “Fresh, funny and thought-provoking – an epic tale of family life with characters that bounce off the page.”