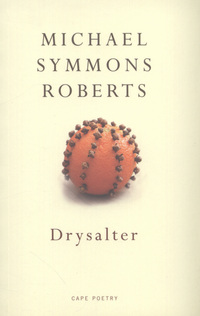 Drysalter by Michael Symmons Roberts  Michael Symmons Roberts’s sixth – and most ambitious – collection to date takes its name from the ancient trade in powders, chemicals, salts and dyes, paints and cures. These poems offer a similarly potent and sensory multiplicity, unified through the formal constraint of 150 poems of 15 lines. Like the medieval psalters echoed in its title, this collection contains both the sacred and profane. Here are hymns of praise and lamentation, songs of wonder and despair, journeying effortlessly through physical and metaphysical landscapes, from financial markets and urban sprawl to deserts and dark nights of the soul. Michael Symmons Roberts has published five collections of poetry, including Corpus, which won the 2004 Whitbread Poetry Award. He has also published two novels, Patrick’s Alphabet and Breath, and a non-fiction book Edgelands (with Paul Farley). He is a frequent collaborator with the composer James MacMillan and as a radio writer and documentary film-maker has won Sony, Sandford St Martin and Clarion Awards. Judges: “He combines philosophical depth with a lightness of touch.”

Dante: The Divine Comedy by Clive James   The Divine Comedy is the precursor of modern literature, and this translation—decades in the making—gives the entire epic as a single, coherent and compulsively readable lyric poem. In his introductory essay, James says that the twin secrets of Dante are texture and impetus. All the packed detail must be there, but the thing must move. It should go from start to finish with an unflagging rhythm. In the original, the basic form is the terza rima, a measure hard to write in English without showing the strain of reaching once too often for a rhyme. In this translation, the basic form is the quatrain. The result, uncannily, is the same easy-seeming flow, a wonderful momentum that propels the reader along the pilgrim’s path from Hell to Heaven, from despair to revelation. Clive James was born in Sydney in 1939. He is the author of more than thirty books. As well as his collections of verse and his five volumes of autobiography, he has published collections of literary criticism, television criticism, travel writing and novels. He appeared regularly for both the BBC and ITV as a television presenter and performer during the 1980s and 1990s. In 1992 he was made a Member of the Order of Australia, in 2003 he was awarded the Philip Hodgins memorial medal for literature and he was honoured with a CBE in the Queen’s last New Year Honours list. Judges: “A towering achievement that will stand the test of time.”

Division Street by Helen Mort
From the clash between striking miners and police to the delicate conflicts in personal relationships, Helen Mort’s stunning debut is marked by distance and division. Named for a street in Sheffield, this is a collection that cherishes specificity: the particularity of names; the reflections the world throws back at us; the precise moment of a realisation. Distinctive and assured, these poems show how, at the site of conflict, a moment of reconciliation can be born. Helen Mort was born in Sheffield in 1985, and grew up in nearby Chesterfield. Five-times-winner of the Foyle Young Poets Award, she received an Eric Gregory Award in 2007 and won the Manchester Young Writer Prize in 2008. In 2010, she was Poet-in-Residence at the Wordsworth Trust, Grasmere. She lives in Derbyshire. Judges: “Wonderful meeting of lyrical poetry, political engagement and a powerful sense of place.”

Hill of Doors by Robin Robertson
Charged with strangeness and beauty, Hill of Doors is a haunted and haunting book, where each successive poem seems a shape conjured from the shadows, and where the uncanny is made physically present. The collection sees the return of some familiar members of the Robertson company – including Strindberg and the shape-shifter Dionysus. Four loose retellings of stories of the Greek god form pillars for the book, alongside four short Ovid versions. Threaded through these are a series of pieces about the poet’s childhood on the north-east coast, his fascination with the sea and the islands of Scotland. Robin Robertson is from the north-east coast of Scotland. His four previous collections have received a number of honours including the E M Forster Award and various Forward Prizes. His last collection, The Wrecking Light, was shortlisted for the 2010 Costa Poetry Award and the T S Eliot Prize. Judges: “Passionate and powerful interweaving of personal and mythic sustained across the form of a collection.”