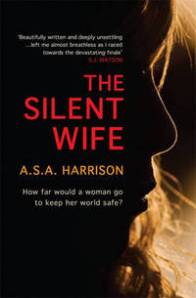 The Silent Wife by A S A Harrison

Todd Gilbert and Jodie Brett are in a bad place in their relationship. They’ve been together for 28 years, and with no children to worry about there has been little to disrupt their affluent Chicago lifestyle. But there has also been little to hold it together, and beneath the surface lie ever-widening cracks

Christmas at Rosie Hopkins Sweet Shop by Jenny Colgan This one’s popular — it’s got 12 reserves on it.

Rosie Hopkins is looking forward to Christmas in the little Derbyshire village of Lipton, buried under a thick blanket of snow. Her sweetshop is festooned with striped candy canes, large tempting piles of Turkish delight, crinkling selection boxes and happy, sticky children. She’s going to be spending it with her boyfriend, Stephen, and her family, flying in from Australia. She can’t wait – but when a tragedy strikes at the heart of their little community and all of Rosie’s plans for the future seem to be blown apart. Can she build a life in Lipton? And is what’s best for the sweetshop also what’s best for Rosie?

The emergence of Judy Taylor by Angela Jackson

Judy doesn’t seem to have a care in the world, until the day she discovers a hard lump. Following a series of nerve-wrecking tests, Judy discovers that ‘everything is absolutely normal’. But instead of the anticipated wave of relief, Judy realises that ‘absolutely normal’ is absolutely not what she wants. She decides to stop taking the path of least resistance and faces up to the reality of what it means to change. She leaves the dependable and heartbroken Oliver for a life of uncertainties in vibrant Edinburgh, just as it emerges into summer festival mode

A 16-year-old girl is found dead on a train line one freezing December night in Derry. Detective Sergeant Lucy Black is called to identify the body of the murdered girl as Karen Hughes. As Lucy delves deeper in to the case, she discovers that Hughes has been living in residential care, the product of an alcoholic mother and a father behind bars. The only clue as to the girl’s movements are her mobile phone and various social media sites – where her ‘friends’ are not all they seem. Meanwhile Lucy’s mind is consumed with the recurring trauma of a previous case. She has to tread carefully: with a new DI to contend with and the Assistant Chief Constable looking over her ear, she can’t afford to make a mistake