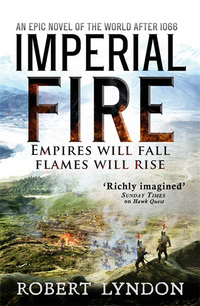 Fans of historical fiction might have enjoyed Hawk Quest, Robert Lyndon’s epic first novel. The author has now published an action packed sequel Imperial Fire. Set in 1081, a band of half-willing mercenary warriors embark on ‘mission impossible’ to China to find the formula for the ‘fire-drug’ =gunpowder.

The action takes them through rough seas, burning deserts, uncharted mountains and plains beyond the Silk Road result in a journey where some meet their death but those remaining are driven on by the promise of vast rewards.

The Frankish mercenary Count Vallon and his army of Outlanders lead the Byzantine empire’s quest for gunpowder. They worki in the service of the soldier emperor Alexius,  who has suffered a crushing defeat by the Norman Robert Guiscard. Vallon is tough and gritty but at 39 is starting to feel his 20 years of campaigning. He also resents this mission which will involve lengthy travel and work. All the quest members have their own reasons for going and all have secrets, some of them deadly ..