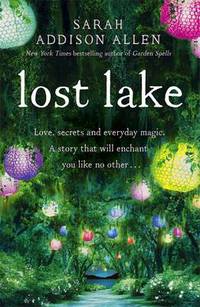 Allen, Sarah – Lost Lake   Kate finally wakes up from the slumber she’s been in since her husband’s death a year ago. Feeling a fresh sense of desire to take control of her life, she decides to visit Suley, Georgia – home to Lost Lake. It’s where Kate spent one of the happiest summers of her life as a child. She’s not sure what she expects to find there, but it’s not a rundown place full of ghosts and other curious oddities. Kate’s Aunt Eby, Lost Lake’s owner, wants to sell the old place and move on. As Kate discovers that time has a way of standing still at Lost Lake, can she bring the cottages back to life?

Binchy, Maeve – Victoria Line, Central Line   if you missed this first time around, new copy With her characteristic mixture of compassionate humour and biting realism, Maeve Binchy enters the lives of passengers who use the London underground system in these engrossing stories. Whilst nameless, the characters take on a reality of their own

Brellend, Kay – East End Angel  Kathy and Jennifer Finch might be twins but their looks are the only thing that they’ve got in common. Kathy has pulled herself up by her bootstraps, becoming a midwife and helping women such as Ruby Potter, terrorized by her brutal husband, Charlie. Meanwhile, sly and mouthy Jennifer has ended up in the gutter, sucked into a sordid life of prostitution and crime

Browne, Hester – The vintage girl    When Evie Nicholson is asked to visit Kettlesheer Castle in Scotland to archive the family heirlooms, she jumps at the chance. Evie’s passion for antiques means that, for her, the castle is a treasure trove of mysteries just waiting to be uncovered. But in each heirloom lies a story, and in the course of her investigations Evie stumbles upon some long-buried family secrets. Add handsome, gloomy heir Robert McAndrew and a traditional candlelit gala to the mix, and Evie’s heart is sent reeling with an enthusiasm that may just extend beyond the Kettlesheer silver Chick lit/romance

Fullerton, Jean – All change for Nurse Millie Nurse Millie Sullivan is now Nurse Millie Smith, having married aspiring MP Jim Smith. The war has ended and the NHS has just come into action, so the nurses are busier than ever as the community realise they no longer have to pay for the services. Minor ailments need attention, babies need to be helped into the world and some of the larger-than-life characters need keeping in line so Millie has enough drama to deal with without having to deal with more from home … and Alex Nolan, her ex-fiance, is back in town

Gill, Elizabeth – The fall and rise of Lucy Charlton 1920, Durham. Since she was a child, Lucy Charlton has dreamed of working with her father in the family solicitor’s firm. But a scandal shatters her dreams and, when her father disowns her, she finds herself on the streets, fighting for survival. Joe Hardy has returned to London after the Great War to find his life in tatters – his father is dead and his pregnant fiancee has disappeared. Then Joe learns he’s unexpectedly inherited an old river house in Durham from a stranger called Margaret Lee. With nothing left for him in London, he makes arrangements to travel north and claim it  Saga

Griggs, Vanessa Davis – The other side of devine Paris Simmons-Holyfield is facing a dilemma – she’s pregnant but is not sure who the father is. After spending a night with Darius Connors, her ex-colleague, the baby could belong to him, but she doesn’t want to ruin her marriage. Darius has his own problems; his wife, Tiffany, has kicked him out. But he doesn’t want to give up on his marriage just yet – even if Tiffany has found company in the arms of Clarence Walker  Love stories.

James, Polly – Diary of an unsmug married Meet Molly Bennett. She’s just passed a ‘landmark birthday’ and is mother to two hormone-driven, warring teenagers. She’s married to Max, who buys her last-minute birthday presents in M&S, and works for a man prone to snooping through her emails. Maybe she needs some more excitement in her life. Everyone seems to be having a better time of it than her, especially her Dad who’s in Thailand searching for a new wife, and her next door neighbour Ellen with her string of toyboys. So when Max starts taking an increased interest in keeping fit and going on ‘business trips’ abroad and less of an interest in their sex life, Molly begins to despair. That is until an old school friend starts flirting with her through Facebook. What will happen if Molly does something out of character and stops being the person everyone wants her to be?Chick lit.

Lane, Lizzie – A wartime wife Bristol, 1939. Feisty, hard-working Mary Anne Randall runs a pawnbroking business from the washhouse at the back of her terraced home. Determined to keep her three children fed and clothed, she puts up with a drunken and abusive husband, who has never forgiven her an earlier, tragic love affair. When Michael Maurice inherits a neighbouring Bristol pawnshop, Mary Anne’s hackles are raised, and the two are at loggerheads. But as the war clouds gather over Europe, old passions are stirred and business rivalry is put aside. Mary Ann realises she must seize what may be a last chance at true love Love stories.

Lewis, Susan – The truth about you  Sunday Times bestselling author Lainey Hollingsworth has spent her whole life on the outside of a secret. Her mother would never discuss the reasons she abandoned Italy when Lainey was a new born, nor has she ever stayed in touch with the family she left behind. Now Lainey’s mother is dead, taking the secret with her, and leaving Lainey free to find out about her roots. Her husband, Tom, appears supportive, until he hits her with a bombshell that shatters the very foundations of their marriage. Another secret Lainey never knew anything about. Shaken, but more determined than ever to find out who she really is, Lainey takes her children to Umbria in search of answers

McCoy, Ken – Jacky boy Frank McGovern is hanged for a murder he didn’t commit, and Jacky’s mother, Maureen, tells him that Frank was his father. On the day of the execution Maureen loses the only man she ever loved and must now raise her three children alone. Enlisting the help of his sister, Ellie, Jacky sets out to bring the real killer to justice  Saga

Moyes, JoJo – Sheltering rain Set in colonial post-war Hong Kong and in a crumbling country house in southern Ireland, this is the story of three generations of women and their profoundly different experiences of love Domestic fiction

Parks, Adele – Spare brides  New Year’s Eve, 1920: the Great War is over, and a new decade of glamour beckons. But, for a generation of women who survived the trauma of war, life will never be the same. With countless men lost, it seems that only wealth and beauty will secure a husband from the few who returned, but lonely Beatrice has neither attribute. Ava has both, although she sees marriage as a restrictive cage after the freedom war allowed. Sarah paid the war’s ultimate price: her husband’s life. Lydia should be grateful that her own husband’s desk job kept him safe, but she sees only his cowardice. This is the story of these four women

Roberts, Nora – Heaven and Earth  Roberts has enchanted readers with her tales of friendship made and hearts lost, of legends, lovers and longing. In this book, the second in the trilogy, she returns to the shores of New England – and to the lives of three passionate, powerful women . Love stories.

Join 850 other followers
Follow Leeds Reads on WordPress.com
If Books Could Blog