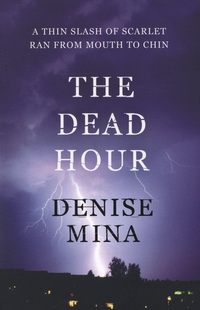 Mina is a Scottish crime writer and playwright. Her Garnethill trilogy and another three novels feature the character Patricia “Paddy” Meehan, a Glasgow journalist. Her work has been described as Tartan Noir, she has also dabbled in comic book writing, having recently written 13 issues of Hellblazer.  Since 2006, she has had two plays performed with successful reception.

The Dead Hour Paddy Meehan, Glasgow’s aspiring journalist, is back on the beat, trawling the streets of Glasgow for a story – something to prove she can write. And then she meets the woman with the poodle perm at the door of a wealthy suburb in the north of the city – blood dripping from her chin

Exile  Travelling down from Glasgow to London to investigate the murder of one of the former clients at the Glasgow Women’s Shelter, Maureen O’Donnell quickly finds herself out of her depth and in danger of suffering a similar fate

Field of Blood In Glasgow, a toddler goes missing, snatched from the front garden of his home. But while the city braces itself for the discovery of a lone sexual predator, the police are led to the doors of two 11-year-old boys

Still midnight  The quiet of a Glaswegian suburb is shattered with a brutal and baffling attack. Armed men invade a family home, shouting for a man nobody’s heard of. A shot is fired, and they escape with a hostage and a demand for two million pounds. It’s a high-profile case that could make DS Alex Morrow’s career

The end of the wasp season When wealthy Sarah Erroll dies a violent death at her home in a posh part of Glasgow, the local community is stunned by what appears to be a truly gratuitous act. Heavily pregnant with desperately wanted twins, DS Alex Morrow is called in to investigate and soon discovers that there is more to Sarah’s murder than it first seems

The Red Road 31st August, 1997. Rose Wilson is 14, but looks 16. Pimped out by her ‘boyfriend’ and let down by a person she thought she loved, she has seen more of the darkness in life than someone twice her age. On the night of Princess Diana’s death – a night everyone will remember – Rose snaps and commits two terrible crimes. Her life seems effectively over. But then a defence lawyer takes pity and sets out to do what he can to save her, regardless of the consequences