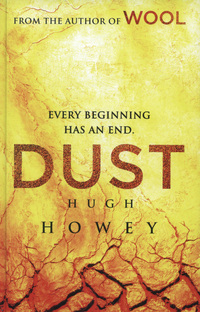 Among the highlights this week are Hugh Howey’s final instalment of the Wool trilogy and from G R R Martin, the multiple award-winning, best-selling author of The Song of Ice and Fire series, a book first published in 1986 about Haviland Tuf  – an honest space-trader who likes cats.

Eden, Greg – Eternal flame   The generation ship Peerless has set out on a mission to discover the technology needed to save its home world from annihilation. But the Peerless is facing urgent problems of its own. It does not carry enough fuel to return home, so without a new form of propulsion the explorers will remain stranded in space

Howey, Hugh – Dust The much-anticipated final instalment of the Wool trilogy. In a time when secrets and lies were the foundations of life, someone has discovered the truth. And they are going to tell. Jules knows what her predecessors created. She knows they are the reason life has to be lived in this way. And she won’t stand for it. But Jules no longer has supporters. And there is far more to fear than the toxic world beyond her walls. A poison is growing from within Silo 18. One that cannot be stopped. Unless Silo 1 step in

Mann, Phillip – The disestablishment of paradise   Something has gone wrong on the planet of Paradise. The human settlers are finding that their crops won’t grow and their lives are becoming more and more dangerous, the indigenous plantlife is changing in unpredictable ways, and the imported plantings wither and die. And so the order is given – Paradise will be abandoned. Not all agree with the decision. There are some who believe that Paradise has more to offer the human race, and so the leader of the research team and one of the demolition workers set off on a journey across the planet

Martin, G R R – Tuf voyaging   Haviland Tuf is an honest space-trader, one of the few, and he likes cats. So how is it that, despite being up against the worst villains in the universe, he has become the proud owner of the last working seedship, pride of Earth’s Ecological Engineering Corps? We’ll leave that aside for now – just be thankful that the most powerful weapon in space is in good hands, hands which now control cellular material for thousands of outlandish creatures. With his unique equipment and powerful spacecraft, Tuf is set to tackle the myriad problems that human settlers have created during their colonisation of far flung worlds

Weir, Andy – The Martian  So that’s the situation. I’m stranded on Mars. I have no way to communicate with Earth. Everyone thinks I’m dead. I’m in a Habitat designed to last 31 days. If the Oxygenator breaks down, I’ll suffocate. If the Water Reclaimer breaks down, I’ll die of thirst. If the Hab breaches, I’ll just kind of explode. If none of those things happen, I’ll eventually run out of food and starve to death. So yeah. I’m screwed

Abraham, Daniel  – The tyrant’s law  Palliako begins a conquest aimed at bringing peace to the world, though his resources are stretched too thin. When things go poorly, he finds a convenient target among the 13 races and sparks a genocide. Clara Kalliam remakes herself as a loyal traitor and starts building an underground resistance movement

Harris, Joanne M – The gospel of Loki With his notorious reputation for trickery and deception, and an ability to cause as many problems as he solves, Loki is a Norse god like no other. Demon-born, he is viewed with deepest suspicion by his fellow gods, who will never accept him as one of their own and for this he vows to take revenge. While Loki is planning the downfall of Asgard and the humiliation of his tormentors, greater powers are conspiring against the gods and a battle is brewing that will change the fate of the worlds

Williams, Jennifer – The copper promise There are some far-fetched rumours about the caverns beneath the Citadel: some say the mages left their most dangerous secrets hidden there; others, that great riches are hidden there; even that gods have been imprisoned in its darkest depths. For Lord Frith, the caverns hold the key to his vengeance. Against all the odds, he has survived torture and lived to see his home and his family taken from him – and now someone is going to pay. For Wydrin of Crosshaven and her faithful companion, Sir Sebastian Caverson, a quest to the Citadel looks like just another job. There’s the promise of gold and adventure. Who knows, they might even have a decent tale or two once they’re done. But sometimes there is truth in rumour. Sometimes it pays to listen. Soon this reckless trio will become the last line of defence against a hungry, restless terror that wants to tear the world apart

Cole, Kresley – Wicked deeds on a winter’s night USA Today bestselling author Kresley Cole delivers a tale about a jaded werewolf and a captivating young witch, adversaries with a vendetta between them

Viehl, Lynn – Disenchanted & co Unlike most folks, Kit doesn’t believe in magic but she can’t refuse to help Lady Diana Walsh, who claims a curse is viciously wounding her while she sleeps. As Kit investigates the Walsh family, she becomes convinced that the attacks are part of a more ominous plot – one that may involve the lady’s obnoxious husband. Sleuthing in the city of Rumsen is difficult enough, but soon Kit must also skirt the unwanted attentions of a nefarious deathmage and the unwelcome scrutiny of the police Chief Inspector. Unwilling to surrender to either man’s passion for her, Kit struggles to remain independent as she draws closer to the heart of the mystery. For the truth promises to ruin her life – and turn Rumsen into a supernatural battleground from which no one will escape alive