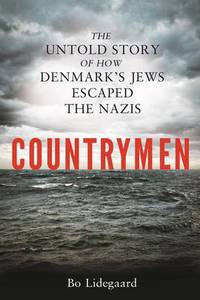 Denmark has been featured in political drama, crime series and recently Hugh Fearnley-Whittingstall’s Scandimania. So you feel you know a little of their culture and ways. Here’s a remarkable account of how the Danes acted to save their fellow countrymen and neighbours which resulted in only 5% of Danish Jews being deported to Theresienstadt transit camp in Bohemia, and over 99% of Denmark’s Jewish population surviving the Holocaust.

Countrymen: the untold story of how Denmark’s Jews escaped the Nazis by Bo Lidegaard

In 1943, 7,742 Jewish citizens of Denmark—95 per cent of the country’s Jews—were spirited away to neutral Sweden with the help of their fellow Danes, under the noses of the occupying German forces. In his new book “Countrymen“, Bo Lidegaard, editor-in-chief of the Danish newspaper Politiken, recounts the “untold story of how Denmark’s Jews escaped the Nazis”.

“Countrymen” is not just a book about the fate of Denmark’s Jews. It is also about the experience—and the moral ambiguities—of the Danish experience of Nazi occupation. Unlike other occupied countries, Denmark was able to preserve a degree of self-rule after the German invasion—it kept its king and maintained its government throughout the occupation. When I spoke to Lidegaard earlier this week, he told that me that he sees the book as a “study of the moral dilemma of facing overwhelming power and of the moral decisions you have to make when you cannot fight against injustice. To what extent do you cooperate and what does that cooperation entail, both in terms concessions and in terms of the ability to do good?”