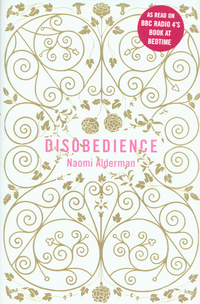 This book is being discussed on Radio 4’s Book Club – Naomi Alderman’s Disobedience. It’s also been a Book at Bedtime.

A small, close-knit Orthodox Jewish community in London is the setting for a revealing look at religion and sexuality in Alderman’s frank yet heartfelt debut novel, Disobedience. The story begins with the death of the community’s esteemed rabbi, which sets in motion plans for a memorial service and the search for a replacement. The rabbi’s nephew and likely successor, Dovid, calls his cousin Ronit in New York to tell her that her father has died. Ronit, who left the community long ago to build a life for herself as a career woman, returns home when she hears the news, and her reappearance exposes tears in the fabric of the community.

The author talks about the book here