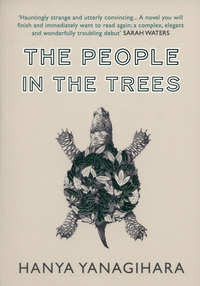 Man Booker long-list author
Hanya Yanagihara has People in the Trees which has received rave reviews from Paul Theroux and Sarah Waters. Loosely based on the true story of the Nobel Prize-winning biologist Dr Daniel Carleton Gajdusek, the story about a 1950s anthropologist and a “lost tribe” is informed by her work on Condé Nast Traveler.
Books by more established authors include:
Barracuda, by the author of  The Slap’ Christos Tsiolkas
The Lie by Helen Dunmore
The Last Days of Anna Madrigal by Armistead Maupin
White Beech: The Rainforest Years by Germaine Greer
To mark the anniversary of the First World War Pat Barker’s Regeneration trilogy has been republished as a single volume, as well as Mark Bostridge’s The Fateful Year: England 1914.

The Last Word by Hanif Kureish is about a fading, Indian-born writer and his young biographer

In the Wolf’s Mouth by Adam Foulds, one of Granta’s Young British Writers 2013. Set in North Africa and Sicily at the end of the last war, it follows the Allies’ botched ‘liberation’ attempts as they chase the Germans north towards the Italian mainland.

Cat out of Hell is Lynne Truss’s first novel in 10 years, promising  “clever references and witty lines, even the odd grammar joke”

The Gospel of Loki  by Joanne Harris (Chocolat) was published for Ragnarok – the date in February 2014 on which the Vikings predicted the world will end.

Lives in Writing, a collection of essays on writers by David Lodge and The News: A User’s Manual by Alain de Botton – new non fiction

The Lemon Grove by Helen Walsh (Brass, Once Upon a Time in England) is about marriage, female desire, and raising other people’s children, set in a villa in Mallorca.

All the Rage by AL Kennedy is a collection of typically sad and affecting short stories;

The Lives of Stella Bain by Anita Shreve begins with a woman waking up in a field hospital with no memory of anything but her name.

April. Shot Through the Heart, by Matt Cain  is set in Hollywood and stars a “beautiful film goddess”. “When Mia meets Leo, the sparks fly. But is dating a paparazzi the biggest mistake of her life?”

A God in Every Stone by the Orange-shortlisted author Kamila Shamsie is “A powerful story of friendship, injustice, love and betrayal … carries you across the globe, into the heart of empires fallen and conquered, reminding us that we all have our place in the chaos of history”.

Alex Through the Looking-Glass: How Life Reflects Numbers and Numbers Reflect Life by Alex Bellos is non-fiction for geeks.

May non -fiction includes The Vagenda by Rhiannon Lucy Cosslett and Holly Baxter, book of the blog and A Curious Career by Lynn Barber,  the book of the career of the ‘interviewer’: ‘what happens,when a nosy child grows up to find her perfect job’. War and Gold: A Five-Hundred-Year History of Empires, Adventures and Debt by historian and MP Kwasi Kwarten

Fallout by Sadie Jones is a story of love, loyalty, danger, and a radical theatre company.

June – Joshua Ferris who wrote Then We Came to the End has a new one – To Rise Again at a Decent Hour. A 40-year-old dentist is appalled when Facebook and Twitter accounts appear in his name –more so when they appear to show a better, online version of himself. It’s about “the meaning of life, the certainty of death, and the importance of good oral hygiene”. I am China is by the Granta author Xiaolu Guo– A translator in London unravels the love story of two Chinese lovers, one of them now an exiled musician.

August sees an as yet untitled novel from Ali Smith and Not That Kind of Girl: A Young Woman Tells You What She’s Learned by Lena Dunham

September-new novels by Nick Hornby and Sarah Waters: The Paying Guests is set in a large household in 1922 London. October – new novel by Colm Toibin, Nora Webster, set in 1960s Ireland, as a young mother struggles to make a life for herself and her sons after the death of the love of her life.

November Nobel Prize-winning writer Mo Yan’s novel Frog has a midwife in a rural community finding herself at the blunt end of the government’s one-child policy. Rose Tremain has the anticipated All I know about The American Lover.