Well 2016 was a year wasn’t it! A year of big changes, and goings on. We can’t comment on the good or bad on this blog, but while it was all happening our library staff were reading the totally awesome selection of books that we have at our fingertips. Below are some of their favourites from last year.

So make your New Years Resolution to discover a new author, or try a new genre of book. Hopefully something in this pile will inspire you.

Children of Time by Adrian Tchaikovsky.

“The best sci-fi novel I have read in years. Set on a grand scale, the novel deals with big concepts like time and evolution without becoming dry. Gripping right until the last page, it instills a sense of wonder in the reader.” Ben, Senior Librarian Manager, Business and Research.

Elizabeth is Missing by Emma Healey

“Told from the perspective of Maud, Elizabeth’s friend, who believes Elizabeth is missing. Maud grows increasingly concerned and anxious as no one seems to take her worries seriously. The story reads as a mystery but as Maud is suffering from dementia it is not clear what is real and what isn’t. Maud lives her life and tries to keep control of her life by writing notes and leaving them around for herself to remind her what she needs to do. It is also very moving to see Maud’s family through her eyes as she struggles to cope but doesn’t see how they are trying to help her. As she tries to find Elizabeth the story of her sister who disappeared at the end of the second world war comes increasingly into her thoughts and this loss, over 50 years ago, mingles with the story of Elizabeth to make it difficult to see the truth. An enthralling, though provoking and very moving read.” Rose, Central Library Manager.

“This is quite a long and complex novel based around Rudolf Hess, and the speculation around the reasons he flew into Scotland during World War II in 1941.
Since 1966 Hess was the only prisoner in Spandau, and was watched by four countries under a joint agreement. So, the question is why? Why was this one person of such importance that four countries should jointly ensure he not be released? Iles takes these known facts and brings them together to create a brilliant novel involving the interests of the U.S., Britain, East Germany, Soviet Union, Israel, South Africa and Libya.” Julie, Senior Communities Librarian, North East. 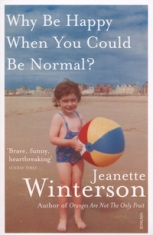 Why Be Happy When You Could Be Normal? by Jeanette Winterson

“I was in floods of tears reading this, and it may well be the saddest book I’ve ever read. It works almost as a companion piece to Oranges Are Not the Only Fruit, but with the fantasy elements stripped out to leave a gritty slice of grim Northern realism. Anyone who has ever doubted the redemptive, life-affirming and life-changing power of books, literature and reading in general would be advised to check this out ASAP. It’s not an easy read and there’s no happy ending, but it’s extremely inspiring indeed.” Stu, Community Librarian, East. 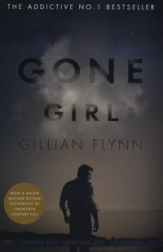 “On the day of their fifth wedding anniversary, Nick’s wife Amy disappears. There are signs of struggle in the house and Nick quickly becomes the prime suspect. It doesn’t help that Nick hasn’t been completely honest with the police and, as Amy’s case drags out for weeks, more and more vilifying evidence appears against him. Nick, however, maintains his innocence. Told from alternating points of view between Nick and Amy, Gillian Flynn creates an untrustworthy world that changes chapter-to-chapter. Calling Gone Girl a psychological thriller is an understatement. As revelation after revelation unfolds, it becomes clear that the truth does not exist in the middle of Nick and Amy’s points of view; in fact, the truth is far darker, more twisted, and creepier than you can imagine. Gone Girl is masterfully plotted from start to finish and the suspense doesn’t waver for one page. It’s one of those books you will feel the need to discuss immediately after finishing because the ending doesn’t just come; it punches you in the gut.

I loved that this book got me hooked from the beginning and the good narrative from both characters’ point of view lets you see the same thing with different eyes. I was amazed by the sheer level of premeditation, preparation and patience that Amy has in the story, and how she serves cold revenge. I found the book a total page-turner with a cliffhanger of an end that pushes you off into a fast fall. I highly recommended to both male and female readers.” Montse, Assistant Community Librarian, East.

“I absolutely love the process of making meringues and seeing the egg whites turn into this wonderful fluffy white soft cloud is pretty magical! I got this book out from the library for inspiration and its fascinating; all the flavours, colours and recipes that you do with the basic meringue mix. If you want to turn your traditional Pavlova in to a ‘Bang On Trend’ taste sensation and riot of colour then this book will definitely set you in the right direction. Even better there is further reading and inspo in their follow on book ‘Everything sweet’.” Rachel, Children’s Librarian, Central Library.

A Child of Books by Oliver Jeffers and Sam Winston

“A Child of Books is a book for anyone that loves reading but perhaps more importantly, is a message for those who haven’t discovered the joy of books or who have forgotten it. It’s a collaborative picture book written and illustrated by Oliver Jeffers and Sam Winston that tells the story of a little girl guiding a little boy on an adventure through literature and imagination. On their journey the children physically explore stories as the landscapes they travel through are constructed from the text of classic children’s books. The story is very simple but extremely powerful. It is a manifesto for the imagination, for childhood and for books. ” Kate, Community Librarian, East.

The art of racing in the rain by Garth Stein

“This is a tale of family, love, loyalty, loss and hope, as seen through the eyes of Enzo, the family dog. Enzo know he is not like other dogs, he knows much of life from the television and through the words of his master Denny. This book will have you sobbing and laughing by turns as you are led through the trials, wonders and absurdities of family life as only a dog could tell it.” Katrina, Deputy Head of Library Service. 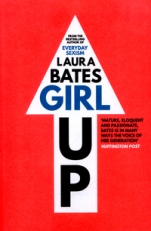 Girl Up by Laura Bates

“I read this as part of a book group. We are all parents of teenagers so this book was a great insight into the difficulties and challenges that teenagers face in these times of social media and celebrity culture. It is part health book, part celebration of the women’s movement and part kick-ass feminist manifesto, all illustrated by drawings that may make you blush, and will certainly make you giggle. I would recommend this wholeheartedly to any parents of teens, and teenagers alike, of both sexes.” Alison, Reader and culture Development Manager.