This new literary prize has recently announced its shortlisted books. The prize will be awarded annually and will seek out the best books by British/British resident BAME writers. The winner will receive £1,000 prize money.

The prize is unique in that it has accepted entries published in the UK in 2016 across a wide range of genres by a writer of colour. This will include fiction, non-fiction, short story, graphic novel, poetry, children’s books, YA and teen.   The prize was also open to self-published writers. It was started by authors Sunny Singh and Nikesh Shukla and Media Diversified, with support from The Authors’ Club and the prize donated by an anonymous benefactor.

The shortlisted books announced yesterday cross a variety of genres and  Judge Musa Okwonga added that they were, “six books that could not be more different in voice, and which could not be more alike in their excellence”.

The winner will be announced at a special event at The Authors’ Club on 17th March 2017.

The Girl Of Ink And Stars by Kiran Millwood Hargrave

When Isabella’s friend disappears, she volunteers to guide the search party. As a mapmaker’s daughter, she’s equipped with elaborate ink maps and knowledge of the stars, eager to navigate the island’s forgotten heart. But beneath the mountains a legendary fire demon awakens, and her journey is fraught with danger.

A Rising Man by Abir Mukherjee

Captain Sam Wyndham, former Scotland Yard detective, is a new arrival to Calcutta. Desperately seeking a fresh start after his experiences during the Great War, Wyndham has been recruited to head up a new post in the police force. But with barely a moment to acclimatise to his new life or to deal with the ghosts which still haunt him, Wyndham is caught up in a murder investigation that will take him into the dark underbelly of the British Raj. A senior official has been murdered, and a note left in his mouth warns the British to quit India: or else.

Black And British: A Forgotten History by David Olusoga

David Olusoga’s ‘Black and British’ is a rich and revealing exploration of the extraordinarily long relationship between the British Isles and the people of Africa. Drawing on new genetic and genealogical research, original records, expert testimony and contemporary interviews, Black and British reaches back to Roman Britain, the medieval imagination and Shakespeare’s Othello. Unflinching, confronting taboos and revealing hitherto unknown scandals, Olusoga describes how black and white Britons have been intimately entwined for centuries.

The Bone Readers by Jacob Ross

When Michael (Digger) Digson is recruited into DS Chilman’s new plain clothes squad in the small Caribbean island of Camaho he brings his own mission to discover who amongst a renegade police squad killed his mother in a political demonstration. 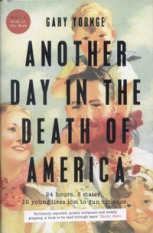 Another Day In The Death Of America by Gary Younge

On Saturday 23 November 2013 ten children were shot dead. The youngest was nine; the oldest was nineteen. They fell in suburbs, hamlets and ghettos. None made the national news. It was just another day in the death of America, where on average seven children and teens are killed by guns daily. Younge picked this day at random, searched for their families and tells their stories. What emerges is a sobering, searing, portrait of youth and guns in contemporary America.

Not that we are biased in Leeds Libraries but of course we would love either The Bone Readers, published by Peepal Tree Press, based in Leeds, or The Girl of Ink and Stars written by Kiran Millwood Hargrave, which we have also chosen for our shortlist for the Leeds Book Awards.