This blog comes from Julia, a community librarian based in the south of the city.

Cats. Beautiful, noble, fascinating, independent and enigmatic. Domesticated around 4000 years ago, they now rank highly amongst our most popular pets. Cats are everywhere, having taken social media and YouTube by storm and the word on the street is that Leeds is to get its own Cat Café later this year! It seems appropriate and timely, then, to have a look at just a few of the fabulous felines who feature as favourites in our selection of fiction (and non-fiction) for all ages. Of course, I’m mindful that in writing this blog, I may be perpetuating the ‘cat lady’ Librarian stereotype but, as those who know me will testify, I AM a ‘cat lady’ Librarian, so here goes!

The association of cats and libraries is not a modern phenomenon: apparently, cats were used in the libraries of Egyptian temples and in medieval monasteries to safeguard precious manuscripts, by keeping rodents at bay! One of the most famous library cats of more recent times was Dewey, who lived at the Spencer Public Library, Iowa, USA, having been abandoned there as a kitten, so the first book on my list is:

Dewey’s nine lives: the legacy of the small-town library cat who inspired millions by Vicki Myron

In addition to the story of Dewey himself, Librarian, Vicki Myron, shares a selection of other true-life tales of incredible cats and the people whose lives they enriched. These heart-warming and uplifting stories capture the amazing ability of animals to touch and enrich human lives.

Another famous feline (now a movie star, no less!) to be found lurking in the non-fiction is Street Cat Bob. Homeless and in dire streets, Bob arrives on the doorstep of James, a busker and former drug-addict who has recently moved from the streets to supported housing, in London. And so begins an incredible friendship, as James gives Bob a home; but that small act of kindness has the most amazing repercussions for both their lives! The incredible story of the amazing relationship enjoyed by the pair has generated a series of inspiring books beginning with this one. 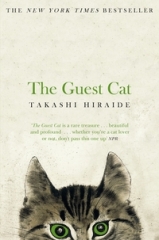 The Guest Cat by Takashi Hiraide

Over on the fiction shelves, The Guest Cat is a beautiful little book (140 pages) recommended to me by a cat-loving friend. The cover alone is a delight to behold, the captivating cat’s eyes conveying something of the enigmatic, other-worldliness of the tale within. The writer is a poet, which is most evident in the gentle, graceful prose. As with the true-stories, this book also explores the unique and incredible impact that interaction with a cat can have on human lives. Cats are ‘free spirits’ and this one is no exception, subtly inviting herself into the home of a couple living in a quiet part of Tokyo, despite having a home of her own! As the visits become more frequent, the couple find themselves increasingly affected by their little guest.

Molly and the cat café by Melissa Daley

If you’re interested in the growing popularity of cat cafés in the UK, you might enjoy this lovely story told from the viewpoint of two-year-old tabby, Molly, who finds herself rehomed in a house with three cat-hating dogs, after her first owner becomes ill. Desperately unhappy, Molly runs away and so begins her journey through the streets as she searches for her forever home. A delightful, easy read, there are tears and laughter along the way and beautifully imaginative descriptions of feline ways!

Continuing the cat café theme, this book is the first in series of stories written especially for children (9 years+). Isla is desperate for a cat, but although her mum works as a nurse for a local vet, Isla is not allowed a pet of her own, so she must make do with visiting the animals at the vetinary surgery. She is particularly fond of a homeless cat, she sees there, so when Isla’s lonely grandmother comes to stay with the family for the summer, Isla has an idea …and then the idea just snowballs! Immediately engaging with fun characters and cute illustrations, this book will purr-fectly appeal to children who love animals. 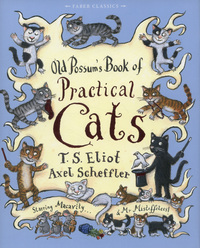 This collection of delightful cat poems, takes me back to my own school days when my recitation of ‘Macavity the Mystery Cat’ earned me a prize in the High School Reading Aloud competition! Eliot originally wrote the poems in the 1930s to amuse his godchildren and friends; then in the 1980s they were adapted by Andrew Lloyd Webber for his West End musical, Cats! These colourful characters created and so exquisitely described by T S Eliot are utterly captivating. Mungojerrie, Rumpleteazer, Old Deuteronomy, Mr. Mistoffelees… each cat has his/her own fascinating story which will delight readers of all ages. These all-time literary favourites are available from Leeds Libraries in a variety of publications.

The amazing story of Adolphus Tips by Michael Morpurgo

One of Britain’s best loved story-tellers, Michael Morpurgo is well known for a whole host of children’s books, many of which feature animals among the central characters. The main part of this story is set during the Second World War, the impact of which, on a family and community, is explored through the diaries of schoolgirl, Lily Tregenza. Lily has a cat called Tips whom she loves ‘more than anyone or anything’ but just as the family and their neighbours face evacuation from their homes, Tips goes missing. A tear-jerking, heart-warming tale of love and friendship, with a brilliant surprise ending, The Amazing Story of Adolphus Tips is recommended for children aged 9 years and above. 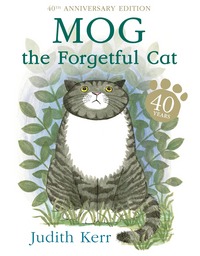 Mog, the loveable family pet, around whom Judith Kerr created a whole series of books, was a firm favourite in our household when our children were young. And these charming, timeless stories with gentle humour and beautiful illustrations are just as enjoyable today. Mog’s comical antics are based on Judith’s observations of her own cats and the series of engaging stories takes us on a journey through Mog’s life with her loving family (tissues at the ready for the final instalment!) Whether you’re meeting Mog for the first time or sharing your own childhood favourite with the next generation of youngsters, this tale of the forgetful tabby who saves the day, will not disappoint.

I love cats by Emma Dodd

This picture book is perfect for pre-schoolers who will delight in the lyrical rhythm and abundance of adjectives as a little girl searches for her ideal pet cat. How can she possibly choose from the many and varied kitties of every shape, size and personality? Colourful pictures, giggles aplenty and a heart-warming ending make this story just right for sharing at bedtime or anytime!

The Cat in the Hat by Dr Seuss

And finally, no blog about literary cats would be complete without the instantly recognisable feline favourite from the pen of Dr Seuss. The Cat in the Hat is now 60 years old, but his unique brand of moggy mayhem and tomfoolery still has youngsters chuckling to this day. The simple rhyming words with colourful illustrations to assist understanding, encourage children to read this classic for themselves – the very purpose for which the book was written! So, hold on to your own hats as you join the mischievous cat and his crazy companions, Thing 1 and Thing 2, on their riotous adventure in the home of Sally and her brother.