We are so sad to hear that poet, novelist and children’s author Helen Dunmore, died of cancer yesterday (5th June), aged 64.

Helen’s fiction in particular was a firm favourite with our readers which her publisher, Penguin Random House characterised as “rich and intricate, yet narrated with a deceptive simplicity that made all her writing accessible and heartfelt”. Dunmore’s writing stood out for the “fluidity and lyricism of her prose, and how well constructed all her narratives were”.

Penguin Random House, which published Dunmore for over two decades, said it was “devastated by the loss of one of our best-loved authors”. A spokesperson said she had been “an inspirational and generous author, championing emerging voices and other established authors” as well as “a very dear friend” to many at the company and the wider literary community.

Here are a few of our favourite books from our catalogue.

Cornwall, 1920, early spring. A young man stands on a headland, looking out to sea. He is back from the war, homeless and without family. Behind him lie the mud, barbed-wire entanglements and terror of the trenches. Behind him is also the most intense relationship of his life. Daniel has survived, but the horror and passion of the past seem more real than the quiet fields around him. He is about to step into the unknown. But will he ever be able to escape the terrible, unforeseen consequences of a lie?

It is 1792 and Europe is seized by political turmoil and violence. Lizzy Fawkes has grown up in Radical circles where each step of the French Revolution is followed with eager idealism. But she has recently married John Diner Tredevant, a property developer who is heavily invested in Bristol’s housing boom, and he has everything to lose from social upheaval and the prospect of war. Soon his plans for a magnificent terrace built above the 200ft drop of the Gorge come under threat.

In the winter of 1952, newly wed Isabel Carey arrives in a Yorkshire town with her husband Philip. As a GP he spends much of his time working, while Isabel tries hard to adjust to the realities of married life. One cold night, Isabel finds an old RAF greatcoat in the back of a cupboard. She puts it on her bed for warmth – and is startled by a knock at her window. Outside is a young man. A pilot. And he wants to come in.

London, November, 1960: the Cold War is at its height. Spy fever fills the newspapers, and the political establishment knows how and where to bury its secrets. When a highly sensitive file goes missing, Simon Callington is accused of passing information to the Soviets, and arrested. His wife, Lily, suspects that his imprisonment is part of a cover-up, and that more powerful men than Simon will do anything to prevent their own downfall. She knows that she too is in danger, and must fight to protect her children. But what she does not realise is that Simon has hidden vital truths about his past, and may be found guilty of another crime that carries with it an even greater penalty.

Leningrad in 1952: a city recovering from war, where Andrei, a young hospital doctor and Anna, a nursery school teacher, are forging a life together. Summers at the dacha, preparations for the hospital ball, work and the care of sixteen year old Kolya fill their minds. They try hard to avoid coming to the attention of the authorities, but even so their private happiness is precarious. Stalin is still in power, and the Ministry for State Security has new targets in its sights. When Andrei has to treat the seriously ill child of a senior secret police officer, Volkov, he finds himself and his family caught in an impossible game of life and death – for in a land ruled by whispers and watchfulness, betrayal can come from those closest to you. 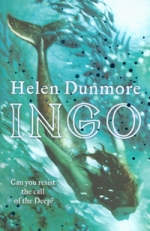 In this magical adventure, storyteller Helen Dunmore writes the story of Sapphire and her brother Conor, and their discovery of Ingo, a powerful and exciting world under the sea.

Morveren lives with her parents and twin sister Jenna on an island off the coast of Cornwall – an island that in the long distant past was devastated by a tidal wave. Only some of those taken by the sea may not have been lost at all. Morveren’s life changes when she finds a beautiful teenage boy in a rock pool after a storm.