Our recommended read and this month’s book club book is The Art of Dying by Ambrose Parry. 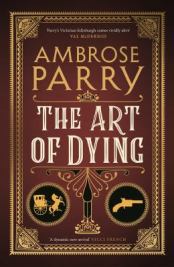 Edinburgh, 1850. Despite being at the forefront of modern medicine, hordes of patients are dying all across the city, with doctors finding their remedies powerless. But it is not just the deaths that dismay the esteemed Dr James Simpson – a whispering campaign seeks to blame him for the death of a patient in suspicious circumstances. Simpson’s protégé Will Raven and former housemaid Sarah Fisher are determined to clear their patron’s name. But with Raven battling against the dark side of his own nature, and Sarah endeavouring to expand her own medical knowledge beyond what society deems acceptable for a woman, the pair struggle to understand the cause of the deaths.

Download the book via Borrowbox(by following this link or downloading the Borrowbox app onto your android or iOS device) in either eBook or eAudiobook format. Don’t worry about having to wait for the book – it can be read by lots of people at the same time, making it ideal for a book club book. 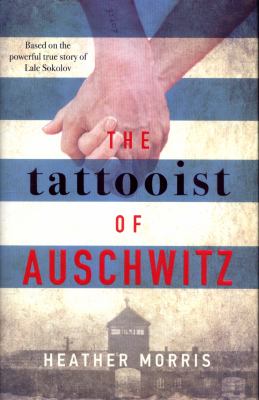 Our recommended read and this month’s book club book is The Tattooist of Auschwitz by Heather Morris.

This novel is based on the true story of Lale and Gita Sokolov, two Slovakian Jews, who survived Auschwitz and eventually made their home in Australia. In that terrible place, Lale was given the job of tattooing the prisoners marked for survival – literally scratching numbers into his fellow victims’ arms in indelible ink to create what would become one of the most potent symbols of the Holocaust. Lale used the infinitesimal freedom of movement that this position awarded him to exchange jewels and money taken from murdered Jews for food to keep others alive. If he had been caught he would have been killed; many owed him their survival.

Download the book via Borrowbox (by following this link or downloading the Borrowbox app onto your android or iOS device) in either eBook or eAudiobook format. Don’t worry about having to wait for the book – it can be read by lots of people at the same time, making it ideal for a book club book.

Below are some topics and questions for you to consider when reading the book. These questions originally came from the publisher.

1. How did you feel about Lale when he was first introduced, as he arrived in Auschwitz? How did your understanding of him change throughout the novel?

2. What qualities did Lale have that influenced the way he was treated in the camp? Where did those qualities come from?

3. Survival in the camp depended on people doing deeds of questionable morality. Lale became the tattooist, but how did Gita’s choices affect her survival? What about her friend who befriended a Nazi?

4. Inmates in the concentration camp had to make life-or-death decisions every day. Why did some make the “right” decisions and survive while others did not?

5. Discuss some of the small acts of humanity carried out by individuals in The Tattooist of Auschwitz. How did these small acts of kindness have greater implications? Did it make you reconsider what you believe to be brave or heroic? Did this make you think differently about the impact of your own everyday actions?

6. The Tattooist of Auschwitz makes clear that there were also non-Jewish prisoners in the camp. How did the treatment of Jews differ from that of non-Jews? How did differences manifest themselves?

7. Had Gita and Lale met in a more conventional way, would they have developed the same kind of relationship? How did their circumstances change the course of their romance?

10. Lale faced danger even after the camp was liberated. How did his experiences immediately after liberation prepare him for the rest of his life?

11. How does The Tattooist of Auschwitz change your perceptions about the Holocaust in particular, and war in general? What implications does this book hold for our own time?

A Brief History of Seven Killings by Marlon James 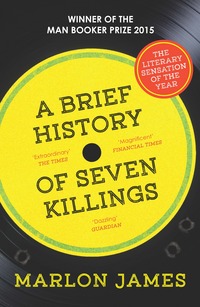 To begin, a couple of notes on the title. This book cannot accurately be described in any way, shape or form as being “brief”; it clocks in at nearly seven hundred pages of tiny print, and even for it a super-speedy reader like me it takes some getting through. Secondly, although the title refers to seven killings, there are an awful lot more than that contained herein. If I said the body count was closer to triple figures it would sound like an exaggeration, but it’s probably actually not far off the mark. This is a brutal, nasty affair in places, packed with the kind of cinematic violence you’d expect from a Tarantino movie, with gallons of claret flowing throughout.
What you’re really dealing with here is a history of Jamaica in the second half of the twentieth century – centering on the savage political violence that split the country in half after its independence from Great Britain in 1962 – told through the distinct voices of innumerable characters, from gangsters and slum-dwellers to CIA operatives and American journalists. Stylistically it’s reminiscent of Faulkner’s As I Lay Dying, with each chapter and episode being narrated by a different protagonist with a distinct narrative voice, from Jamaican patois to American hipster slang. It’s epic in scope, taking in the slums of Kingston, the keys of Miami and the desolate urban sprawl of 70s New York, and it works on so many different levels that it almost defies belief. It’s a literary page-turner, a pulp-fiction thriller, an investigation of the shooting of Bob Marley (referred to as “The Singer” throughout) two days before the Smile Jamaica peace concert in 1976. It contains flavours of Southern gothic and film noir, and the whole thing is shot through with a rich vein of super-dark humour which can’t help but raise a smile, despite the bleak nature of the subject matter. The characters are beautifully drawn and their individual voices are superbly rendered – this really is writing of the highest order. According to the blurb on the cover it made it onto 23 ‘book of the year’ lists when it was published. All the plaudits are richly deserved. I absolutely caned my way through this, desperate to see how it would finish, and yet was disappointed when it finally ended as I felt like I wanted to read more. A genuinely challenging, stimulating and thoroughly entertaining read, and how many Booker Prize winners can you say that about? Absolutely brilliant.

Flowers For Algernon by Daniel Keyes 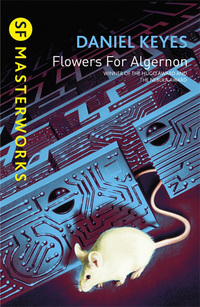 I’ve long been familiar with the plot and general themes of this vintage sci-fi novel, but it’s only recently that I’ve finally got around to reading it. For the uninitiated, it’s the story of Charlie Gordon, a man with an IQ of 68 who works a menial job sweeping the floor in a baker owned by a friend of his uncle, who secured him the job to prevent him being sent to a mental institution. Charlie is selected by scientists to take part in a trial for a new surgical procedure which can increase intelligence, a technique which has previously been tested on laboratory mice, one of which is the Algernon referred to in the title. The surgery is a success, and Charlie’s IQ triples, but the effects are not quite as anticipated.

He realises that his ‘friends’ at the bakery aren’t his friends at all; they like having him to be around to make fun of and make them feel better about themselves, and they’ve coined a phrase – “pulling a Charlie Gordon” – to describe someone doing something to unintentionally make a fool of themselves. They feel threatened by his new intelligence, turn against him and he ultimately ends up losing his job. Despite being blessed with a genius level IQ, Charlie still has the emotional intelligence of a child, and struggles in social situations; he speaks to scientists and professors, but finds their conversation limited and dull; he seeks the love of a woman, but his intellect is such that he can’t engage with the opposite sex on any kind of basic level, and he’s lonelier than he ever was before the operation.

I don’t want to give the ending away so won’t say any more about the plot, but this is a great take on the Frankenstein fable about scientists playing God and the terrible consequences that it can bring. For those who don’t consider themselves fans of Sci-fi, don’t let the label put you off. The premise may be sci-fi, but this is set in a very recognisable universe, features very real, believable characters and shows some uncanny psychological insight throughout. Be warned though – it’s not a happy read and the ending is a real tear-jerker. It’s a startlingly original bit of writing which has become a stone cold classic since its first publication in novel form in 1966, and deservedly so. Well worth checking out if you fancy a left-field, thought-provoking read. 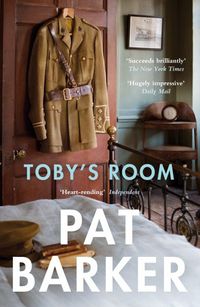 This novel sees Pat Barker return to the subject of the First World War, and it’s absolutely brilliant. The story starts in 1912. Elinor and Toby Brooke have a relationship far closer than any brother and sister ever should, and one that they never dare acknowledge. Fast forward to 1917 – Toby is gone, missing presumed killed in the carnage of Flanders. Elinor is trying to find her feet as a professional artist, and is struggling to come to terms with what happened to her brother. Only one man – Kit Neville – an old friend from art school who was one of his stretcher bearers knows what happened to Toby, but he is suffering too, struck down by a hideously disfiguring facial wound. Only their mutual friend, commissioned war artist Paul Tarrant, can find out the truth, but will it be too much for Elinor to bear?
One of the great strengths of this novel is Barker’s incredibly perceptive understanding of her characters and their motivations, and her depiction of the complex relationships between them is first class. Her descriptions of the chaos of war and the effects it has on the men fighting it are startlingly real, and the climactic scene in which Neville describes the real events that lead up to Toby’s death while a winter storm rages outside is staggeringly emotional.
Technically it’s superb – practically flawless, actually. The descriptive prose is brilliant, the dialogue pitch-perfect, the scenes of war cataclysmic and the bits about the facial injuries suffered by many – as painted by Henry Tonks, who appears as a character in this novel – stomach-churningly graphic. Barker sets the plot in motion immediately, and right from the first couple of pages I was absolutely hooked on this. It’s a great story, beautifully written and told by an artist with an absolute mastery of her craft. Superb stuff.

Reviews from Stu, a Community Librarian based in the east of Leeds.