This blog post comes from Ben, who manages our Business and Information library at Central library. 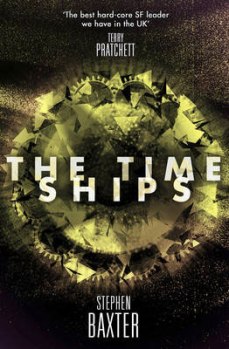 My rediscovery of a love of Science Fiction came about last August on holiday in Majorca. The jury’s out as to whether I had heat stroke or a virus but either way I spent 48 hours dividing my time between visits to the bathroom and lying in bed. There wasn’t much else to do except read, so I finished the 2 books I’d taken with me (Prisoners of Geography by Tim Marshall and Alan McGee’s story of Creation Records) pretty quickly. I managed to make it to the hotel foyer where there was a shelf full of random sun-bleached paperbacks that holiday makers had abandoned. In-amongst the chick-lit and James Patterson novels there was a book that intrigued me, it was “The Time Ships” by Stephen Baxter, which the cover told me was the authorized sequel to The Time Machine by H G Wells. I hadn’t read any Science Fiction since I was a teenager, I wasn’t really expecting much but took it back to my sick bed and soon got hooked. The story takes up where The Time Machine left off. This won’t mean much if you haven’t read the original but the Time Traveller, wracked by guilt, decides to return to the year 802,701 to save Weena (a devolved human from the future that he failed to save in the first book). However when he travels into the future he discovers that this timeline is no longer accessible because he has changed history through his previous journeys through time. He then embarks on adventures in time into distant pasts and futures (and even a strange alternate World War 2 at one point), but each journey alters reality. It tied my head in knots but in a really good way.

Time Ships had whetted my appetite, and the next novel I read was “Children of Time” by Adrian Tchaikovsky. The last survivors of the human race leave the dying Earth, desperate to find a new home. Thousands are in suspended animation aboard a colossal ship, in hibernation until they find a habitable planet, heading for a world that was terraformed by humans long ago. The story alternates between the humans on the space ship, who are travelling for hundreds of thousands of years, and the evolution of intelligent life on the terraformed planet. While life advances on the terraformed planet it regresses on the space ship. You sense events are building to an inevitable collision between the two civilizations and the tension is unbearable by the end of the novel. This book makes you ponder really big themes – time, evolution, religion, God – but ultimately it’s also an excellent story. 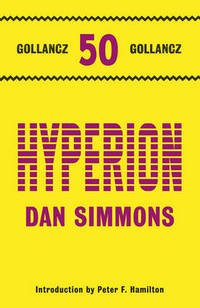 A couple of weeks ago I read “Hyperion” by Dan Simmons, a book that always features in top 10 Sci-fi lists. This book is really intense, in parts it’s as much horror as Science fiction. I read it in one week, and I absolutely couldn’t put it down even though it literally gave me nightmares! The galaxy is on the brink of a massive war, and the mysterious planet of Hyperion holds secrets that both sides want to exploit. Seven pilgrims set out on an epic journey to confront the Shrike – a monstrous creature “part god part killing machine” that inhabits Hyperion. The book consists of each of the pilgrims telling their tale to the others, to explain their reason for confronting the Shrike. It’s a strange, incredibly imaginative – and at times very dark – story, but the worlds and universe that Simmons has created are rich, detailed and colourful.

All three of these massively inventive books combine gripping story-telling with an ability to instill a sense of wonder in the reader and actually make you think more about the nature of the universe.