We are happy to support the Dying Matters campaign as we realise that death is an important subject even if it is not easy to talk about. Their mission is to help people talk more openly about dying, death and bereavement, and to make plans for the end of life. This book list is designed to help stimulate discussion and is only a sample of what is available in Leeds Libraries. The aim is to help people not only celebrate living but be empowered and informed as they face the end of life .

These books offer an opportunity to engage in this taboo subject, to learn and find solace in other people’s experiences as well as helping to find the answers to questions you never dared ask lastly ,to share ones last wishes with friends and family.

A Death Café will be running bi-monthly at The Reginald Centre Community Hub, Chapeltown in partnership with Xina Broderick, a local funeral Director, starting on Saturday 21st of January. Further details can be found here.

An unusual new book that encourages us to change how we think about dying. Throughout the book, author Sally Petch asks us to start talking about and planning our own death – so that we can reach a place of acceptance and lessen our fear of an event which is ultimately inevitable. “Death Matters is an easy to read book. Sally Petch has performed us a great service in helping us come to terms with the idea of death.” Satish Kumar, Editor-in-chief, Resurgence Magazine

The Welcome Visitor by John Humphrys

Death is a subject modern society shies away from. But if we regard death as a failure in our desire to prolong life, can we ever arrive at a humane approach to those whose lives have lost meaning? Here, John Humphrys and his co-author Dr Sarah Jarvis take a wider look at how our attitudes to death have changed as doctors have learned how to prolong life beyond anything that could have been imagined only a few generations ago, and confront one of the great challenges facing the western world today. There are no easy answers but the first step must surely be to accept that death can be as welcome as it is inevitable.

Being mortal: illness, medicine and what matters in the end by Atul Gawande

Atul Gawande examines his experiences as a surgeon, as he confronts the realities of ageing and dying in his patients and in his family, as well as the limits of what he can do. He emerges with a story that explores a range of questions. 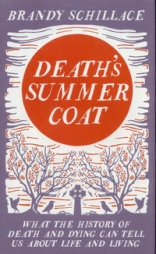 Death’s summer coat: what the history of death and dying can tell us about life and living by Brandy Shillace

Consideration of death and dying is back in the public forum. People are sipping tea at Death Cafes. Poses the question how can we approach death in a culture dead set against talking about mortality? Written with humour and humanity

On her deathbed, Kate Greene’s only concern was for her two little boys, Reef and Finn, and her loving husband, Singe. She knew she’d be leaving them behind very soon. The couple talked and cried together as she wrote her thoughts and wishes down, trying to help the man she loved create the best life for their boys after she was gone

How to have a good death: Foreword By Esther Ranzen who shares her personal experience of losing her late husband Desmond Wilcox

Find out how to deal with death, from understanding the process of dying to communicating with hospital staff and working through difficult stages of bereavement. A book that helps you prepare and plan for a good death, with informed choices and practical advice.

Wills and Probate by David Bunn

This two-in-one guide to making a will and obtaining probate for the estate of someone who has died could help readers save thousands of pounds on legal fees. The guide covers the whole of the U.K.

A good death contributes to a good life, so we owe it to ourselves and our loved ones to deal with a reality most of us don’t want to face. Find out how to deal with death, from understanding the process of dying to communicating with hospital staff and working through the difficult stages of bereavement

Poems and readings for funerals and memorials Edited by Julia Watson

This book gathers together many of the treasured and poignant poems, readings, quotations and religious extracts that both celebrate life and express grief and sorrow about death,

Smoke Gets In Your Eyes by Caitlin Doughty

Doughty – a twenty-something with a degree in medieval history and a flair for the macabre – took a job at a crematory, turning morbid curiosity into her life’s work. Thrown into a profession of gallows humour and vivid characters (both living and very dead), Caitlin learned to navigate the secretive culture of those who care for the deceased. This book tells an unusual coming-of-age story full of bizarre encounters and unforgettable scenes

Standing on my brother’s shoulders: Making peace with grief and suicide by Tara J. Lal

What does dead mean? a book for young children to help explain death and dying by Caroline Jay

This is an illustrated book that guides children gently through the ‘big’ questions they often ask about death and dying. Suitable for children aged 4+. This is an ideal book for parents and carers to read with their children, as well as teachers, therapists and counsellors working with young children.

Always and Forever by Debi Gliori

When Fox dies the rest of his family are absolutely distraught. How will Mole, Otter and Hare go on without their beloved friend? But, months later, Squirrel reminds them all of how funny Fox used to be, and they realise that Fox is still there in their hearts and memories.

Are You Sad, Little Bear? by Rachel Rivett and Tina MacNaughton

A book about learning to say goodbye. This charmingly illustrated picture book will help young children in times of bereavement, loss or change, gently exploring the reasons for saying goodbye and giving reassurance that goodbye doesn’t mean the end of things.

After the phenomenal success of The Storm Whale and On Sudden Hill, this new book by Benji Davies deals with the emotional topic of losing a grandparent. Subtly told, this beautifully illustrated book tackles a difficult subject with great sensitivity and depth.

The fault in our stars by John Green

Despite the tumor-shrinking medical miracle that has bought her a few years, Hazel has never been anything but terminal, her final chapter inscribed upon diagnosis. But when a gorgeous plot twist named Augustus Waters suddenly appears at Cancer Kid Support Group, Hazel’s story is about to be completely rewritten.

Tuesdays with Morrie by Mitch Alborn

Maybe it was a grandparent, or a teacher or a colleague. Someone older, patient and wise, who understood you when you were young and gave you sound advice to help you make your way through life. For Mitch Albom, that person was Morrie Schwartz, his college professor from nearly twenty years ago. Mitch Albom rediscovered Morrie in the last months of the older man’s life. Knowing he was dying of motor neurone disease – MItch visited Morrie in his study every Tuesday, just as they used to back in college. Their rekindled relationship turned into one final ‘class’: lessons in how to live.

Margaret Forster’s most personal biography yet. It takes up the intertwining story of her gritty, 96 year old northern father, Arthur with that of her sister-in-law, Marion, who dies of Cancer. Margaret Forster’s father was not a man to answer questions about life and death, so she attempts to answer them for herself. As Forster looks back at Arthur’s life an indomitable man, she evokes incidents from her childhood, his working life and stubborn old age, trying to make sense of their largely unspoken relationship and of his tenacious hold on life, and on his family. Arthur and Marion’s lives were ordinary, but, when faced with death become precious.