This blog comes from Julia, a Community Librarian based in the south of the city.

If asked about my taste in fiction, my answer would have to be ‘eclectic’, as some of my favourite reads are from completely diverse genres.  And that’s one of the reasons why I love being part of Leeds Libraries’ readers’ groups which give me the opportunity to read books that otherwise I probably wouldn’t select …only to discover some terrific stories. (Never judge a book by its cover!) Here are just some of the novels that I’ve enjoyed at Book Clubs and would recommend that you try:

A debut novel, inspired by a true story, Burial Rites is set in Iceland in 1829 and tells the tale of Agnes, accused of a brutal murder and billeted with a family at a bleak, remote farm over winter, to await execution.  Well written and atmospheric, the story is compelling and the central characters described in detail.  The exploration of various relationships develops into a strong examination of the effect of the State forcing a family to accept a prisoner living amongst them and the turmoil of emotions which this brings.

The Little Stranger by Sarah Waters

A ghost story – or is it? It’s up to you to decide!  This gothic novel is set at the end of the Second World War, when the NHS is just being established, the class system is changing and big old houses such as the one featured, are falling into disrepair, abandoned in the drive for modernity.  The protagonist is a young doctor whose mother had once worked at the house and who remembers the family’s halcyon days.  However, there are some spooky goings on; or are they just imagined by the various damaged individuals who live at or visit the property? 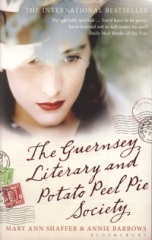 Charming, funny, engaging, tear-jerking, heart-warming…. I’m spoilt for choice when it comes to descriptive words for one of my very favourite reads, which even features its own readers’ group within its plot!  It’s a story set at the end of World War Two, told through a series of letters exchanged between writer, Juliet Ashton and her friends and colleagues.  But when she receives a letter from a stranger who lives in Guernsey, little does she know that her life is about to change forever.

A Place of Execution by Val McDermid

A real ‘page turner’ which gripped me from the word go and kept me captivated until the very end.  Fantastic crime fiction but with hint of realism as the story unfolds against the backdrop of the true crimes of moors murderers, Brady and Hindley.  A 13 year old girl, Alison Carter, has gone missing from the small, close-knit northern village of Scarsdale and DCI George Bennett steps up to lead the investigation.

The Earth Hums in B Flat by Mari Strachan

Interesting and easy to read, this story is set during the 1950’s in a small Welsh town where everyone knows everyone else’s business!  The protagonist is 12-year-old Gwenni Morgan, the ‘voice’ of the book, through whose innocent eyes we see the comings and goings of her family and neighbours (including some fabulous characters) but as the story unfolds, the complexities and problems which lie below the surface of their lives are explored and family secrets are revealed.  A beautifully written and thought provoking book which prompted an enjoyable discussion at Book Club.

The Language of Flowers by Vanessa Diffenbaugh

You’ll never look at a bouquet in the same way after reading this book – and you’ll certainly choose your flowers with care after learning of the Victorian meanings associated with particular blooms.   The emotional and enthralling story of Victoria Jones, a young woman making the transition from a difficult childhood into adult life and for whom her own understanding of the language of flowers brings hope for the future. 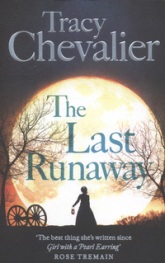 The Last Runaway by Tracy Chevalier

This is the story of Honor Bright, a young Quaker woman, jilted by her fiancé, who runs away from her life in England for the challenges of America in the early 1800s where she comes into contact with ‘runaways’ of a different kind.  The plot addresses themes of personal honour/values, the Quaker belief in equality, slavery and what some will do to help others despite the dangers involved. These were brutal times but issues raised still resonate in today’s world.  An easy read with interesting plot twists and well researched history.

It doesn’t seem quite right to say that I ‘enjoyed’ this book which tackles dark and harrowing subject matter but I was totally captivated by the story, told through the realistic voice of 5-year-old Jack who is held captive with ‘Ma’, in a single room.  It’s an emotional but utterly compelling read; hair-raising at times, when I could hardly bear the suspense.  (No surprise then, that it has subsequently been made into a film.)  Brilliantly written, heartfelt and thought-provoking, I do recommend that you give it a try. 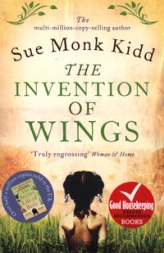 The Invention of Wings by Sue Monk-Kidd

This book was inspired by the story of real sisters from the early 19th Century, who ultimately took a prominent role in the abolitionist movement. The fictional story, set in the American Deep South, is told via the alternating and interlinked narratives of Sarah Grimke, and her slave, Handful.  It is a moving read, exploring powerful issues including the parallels between the limitations of the life of a slave at the time, and that of her wealthy mistress. 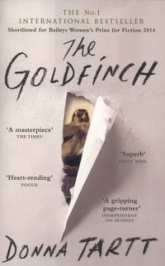 The Goldfinch by Donna Tartt

Don’t be put off by the sheer size of this book (circa 800 pages) as the story is a captivating read which will quickly draw you in!  With action in New York, Las Vegas and Amsterdam, the plot follows the fortunes (and misfortunes) of young protagonist, Theo Decker who survives a terrorist explosion at the Metropolitan Museum and absconds with his mother’s favourite painting, a priceless Dutch masterpiece.  However, the story is much more than an account of what happens next; exploring themes of love, loss and loyalty through a variety of brilliantly drawn characters.