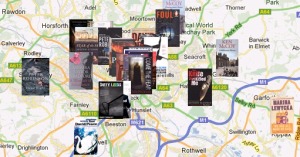 We’ve been updating our Leeds Reads literary map of places in Leeds mentioned in novels and we’ve now got around 60 novels on it.

Please get in touch if you know of any other novels we can add. They should be in the catalogue so we can link to them or ones we’d want to buy so need to be in print.

Berlin is a city with so much history. Here’s 10 books to borrow from the library. They include a range of stories from political oppression to tales of romance and adventure.  Ten captivating novels to evoke Berlin.

Hans Fallada – Alone in Berlin – Berlin, 1940, and the city is filled with fear. At the house on 55 Jablonski Strasse, its various occupants try to live under Nazi rule in their different ways: the nervous Frau Rosenthal, the bullying Hitler loyalists the Persickes, the retired judge Fromm, and the unassuming working-class couple Otto and Anna Quangel

Christopher Isherwood – Goodbye to Berlin – . Evokes the gathering storm in Berlin before and just after the rise to power of the Nazis, as seen through the eyes of a series of individuals

Chloe Aridjis – Book of Clouds – Adrift in Berlin and with no desire to return home to Mexico, Tatiana tries to distance herself from the city’s past. Yet the phantoms of Berlin are more alive to her than the people she passes on her daily walks. When she takes a job transcribing notes for the reclusive historian Doktor Weiss, her life in Berlin becomes more complex

Ian McEwan – The Innocent – McEwan acknowledges his debt to the historian David Martin for the true story of the Berlin Tunnel or Operation Gold. To this truth, McEwan has wedded a fiction of tragedy and a love story of a sort

Anna Funder – All that I am: Stories from behind the Berlin Wall – stories of people who found the courage to resist the Stasi,

Jonathan Littell – The Kindly Ones – This Faustian story with a terrifying twist is the fictional memoir of Dr Max Aue, a former SS intelligence officer, who has reinvented himself as a family man and owner of a lace factory in post-war France

Ida Hattemer-Higgins – The history of history: a novel of Berlin – A young American woman stumbles one morning from the forest outside Berlin – hands dirty, clothes torn. She can remember nothing of the night. She returns to the life she once knew, but soon an enigmatic letter arrives from an unknown doctor claiming to be ‘concerned for her fate’

Paul Beatty – Slumberland – After creating the perfect beat, DJ Darky goes in search of Charles Stone, a little-known avant garde jazzman, to play over his sonic masterpiece. His quest takes him to a recently unified Berlin, where he stumbles through the city’s streets ruminating about race, sex and love in search of his artistic – and spiritual – other

David Thomas – Blood Relative – Atmospheric page-turner that brings the often-grim realities of socialist Berlin to life. A murder mystery-come-psychological thriller with a dark underlying mystery, it grips you tight and keeps you guessing until the very last page

The Scottish  Booktrust have recommended ten novels set in Japan- ‘Japan is a land rich with possibilities for authors keen to explore its unique history and diverse culture…. most enigmatic of countries’.

Ruth Ozeki – A Tale for the Time Being Enchanting mystery

Iain Banks – Canal Dreams Set in Japan & Panama Canal, story of a world famous Japanese cellist, who refuses to fly, and as a result finds herself involved in the ominous realm of global realpolitik

David Mitchell – Number9 Dream (Talking Book) Eiji Miyake arrives in a sprawling Japanese metropolis to track down the father he has never met, but the city is a mapless place if you are 19, broke, and the only person you can trust is John Lennon.

Edmund De Waal – The Hare with Amber Eyes: A Hidden Inheritance – 264 wood and ivory carvings of animals, plants and people, none of them larger than a matchbox; apprentice potter Edmund de Waal was entranced by the collection when he first encountered it in the Tokyo apartment of his great uncle Iggie. When he inherited them, he discovered that they unlocked a story larger than he could have imagined.

Kazuo Ishiguro – An Artist of the Floating World The year is 1948. Japan is rebuilding her cities after the calamtity of WW2. Masuji Ono, the celebrated painter, reflects on a life and

career touched by the rise of Japanese militarism

Haruki Murakami – Norwegian Wood We have it as a Talking Book as well. Toru Watanabe is looking back on the love and passions of his life and trying to make sense of it all.

Arthur Golden – Memoirs of a Geisha – Totally loved this one. This seductive and evocative epic tells the extraordinary story of a geisha girl. It reveals the cruelty and ugliness of life behind the rice-paper screens.

Andrew Mitchell – One Morning Like a Bird – Tokyo, 1940. While Japan’s war against China escalates, young Yuji Takano clings to his cocooned life. But conscription looms and the mood turns …